Built in 1876 as a Methodist church this Quinte West historical landmark known as the Johnstown Church operated as a place of worship until 1972.
After years of neglect and disrepair it was slated for demolition. Local resident Roy Bonisteel was not prepared to let this happen. He renovated and restored the building in 1994 creating a unique gathering place for the community.

Today, owners Lesley Bonisteel and Brian Weston are continuing to fulfil Roy’s vision and the vision of those who helped build this church building over 140 years ago by providing a place with a sense of community.

The Old Church Theatre provides a venue for alternative entertainment and education. As a non-religious, non-profit organization, our focus will continue to be toward bringing various groups together into an environment which reinforces our social common ground.

In the past we have brought together seniors, youth, homeschoolers, musicians, artists, playwrights and actors. Each has learned from the other through our workshops, films, concerts and presentations and many times the student has imparted his or her own wisdom upon the teacher. 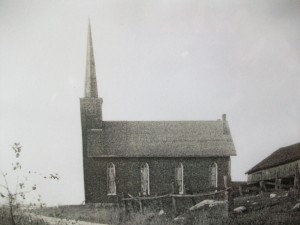 We see the Old Church Theatre as a 140 year old historical landmark that continues to  learn and grow.  Its value to the community rests on its ability to keep being viable as a place where people can gather,
just as it was in 1874, when churches were the main sources of community activity as well as religious observation.

The Old Church Theatre is reinventing itself in a time when  structures such as these are being allowed to deteriorate and be demolished in Ontario and
throughout the country. We will continue to show films, perform plays, display art, have authors read to us,have musicians play and to host all manner of story telling here in what our resident sound engineer Andy Thompson calls “this a gem of a performance space”.

The following was written by Brian Weston for the Illustrated Historical Atlas of the Counties of Hastings and Prince Edward. M.Beldon and Co. MMX:

While many old church buildings throughout southern Ontario fall into various states of neglect and decay, the one in Johnstown , east of Glen Miller in Quinte West has found new life as a venue for music, movie and theatre lovers. The Old Church Theatre began its long run as a Methodist Church in 1874 and continued successfully until 1973 when the congregation dwindled to the point where it was no longer feasible to keep it going. Once closed, the results were predictable.

Long time resident Roy Bonisteel was saddened to see the building get demolished ‘one party at a time’ and frustrated that there was little local interest in preserving it. He did the only thing he could to reverse the inevitable path to destruction: He bought it. Never one to shy away from a challenge, he once confessed: ‘I may have bitten off of more than I can chew’. Nonetheless, Roy began the painstaking task of bringing the building back to life. After completing a careful and respectful renovation in 1996 the old Johnstown Church began its second career as a community centre.

By 2005 Roy had completed two stints as Journalism professor in residence at the University of Regina and had completed a six year term as a citizenship judge in Toronto and somewhere along the way had found an old cottage property in Quebec to tend to. It was time to pass on the ‘ Old Church ‘ to younger hands. Luckily his daughter, Lesley Bonisteel was up for the challenge and bought the property with her husband, Brian Weston in 2005.

Always known as the ‘ Johnstown Church ‘ the first order of business for the new owners was to create a new public perception for a 135 year old church. It was important to make a public statement about new goals and so the name was changed to The Old Church Theatre to reflect a commitment to establishing the venue as a centre for story telling of all types. What is the common thread of such presentations as a reading by best selling crime writer Rick Mofina and the performance of a play by local playwright Richard Turtle? Or a screening of the film ‘Food Inc, ‘ and a concert by the local Celtic band Seventh Town ? Stories, of course and the art of how they are revealed to us. What better place is there to tell the tales that affect us all than from an old church, at one time the cultural heart of the rural community?

Although newly regarded as a community based gathering place, its reach was limited to the immediate neighbourhood. New uses and activities were introduced to broaden the appeal and therefore increase its patron base. An email initiative was undertaken to gather as many interested people as possible. A Federal Government grant was obtained in 2010 to replace the windows, seating and sound system thus allowing an expanded season of programming and more comfortable surroundings.

Creating a varied agenda of entertainments is an evolutionary process and one of the happy results of these efforts was the interest, involvement and energy of the Senior members of the community. More often than not, the tasks of organizing repair, building and attendance was fulfilled by this vibrant group.

Lesley and Brian have spearheaded a whole new life for the Old Church while preserving its historical and cultural integrity. Offering live music, alternative movies, author’s readings, theatre and community gatherings, the ‘Old Church Theatre’ has once again found a place as a centre for rural life in the Johnstown area. The Old Church Theatre sits atop the hill at the intersection of Bonisteel Road and Stickles Road and its signature tower with its four windows can be seen from the 401. From the top of the tower you can look into all three of the surrounding counties; Hastings, Prince Edward and Northumberland. It is a very special place indeed. 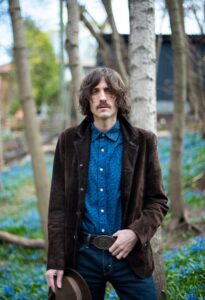