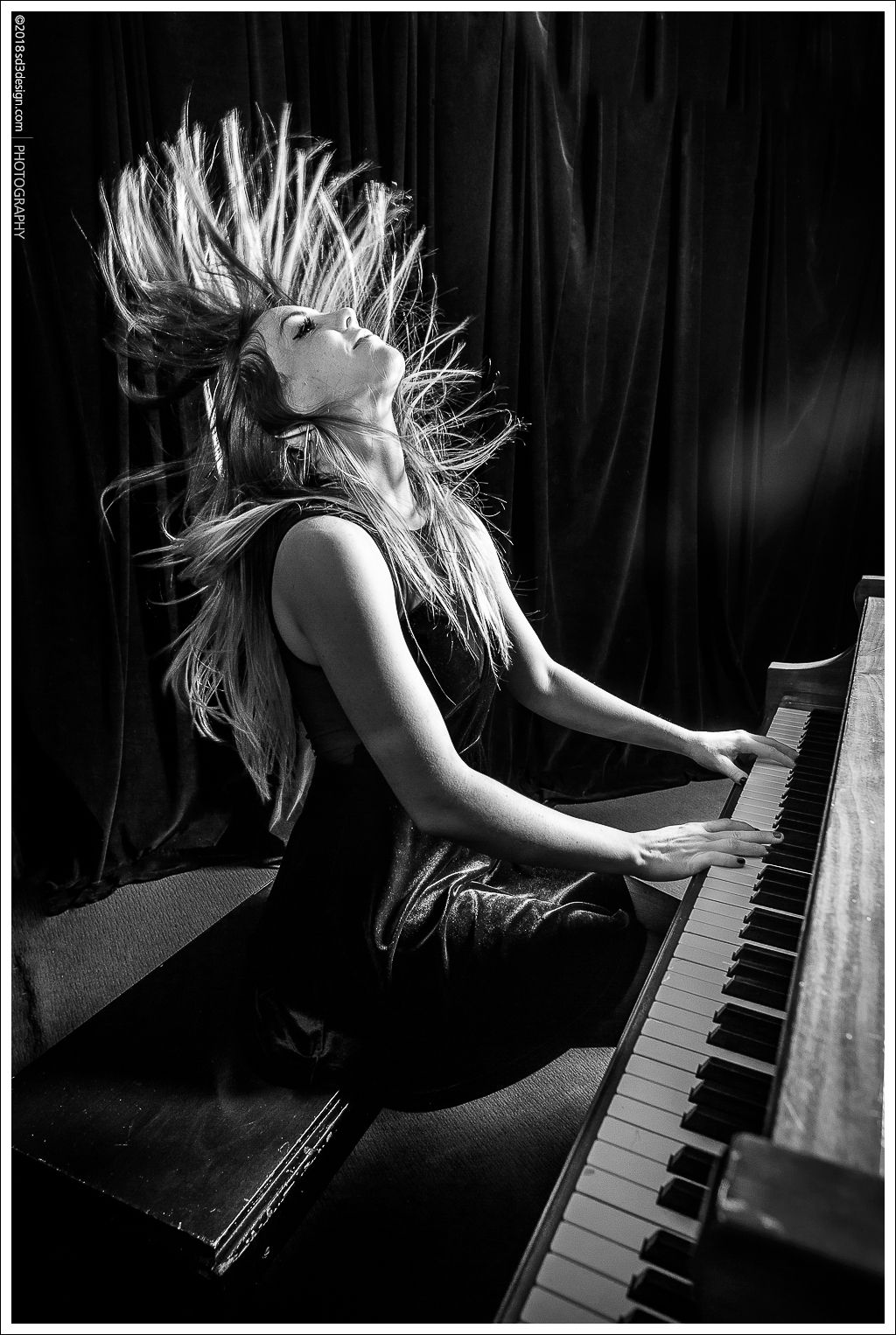 Two-time Maple Blues Award nominee, Jenie Thai is a songwriter and pianist with an old-school soul and boogie-woogie style. Inspired by America’s great songwriters, she blends her love of classic R&B with a contemporary edge in tough but tender ballads and fiery house-rockers.

Jenie’s sophomore album, Night on Fire, was released September 2018 with a sold-out show at Toronto’s Hugh’s Room Live. This concert was one of a number of successes she’s had in the last year — including standing ovation performances at Massey Hall and her debut at the Mariposa Folk Festival.

When you meet her, Jenie Thai is composed, pleasant, amiable, friendly, and — she won’t like the word but you have to live with it — sweet. She has an open face, long blonde hair, a ready smile and an easy laugh.

And she is also tough, and gritty, and plays barrelhouse piano steeped in the blues — and if that wasn’t enough to get your head around, she also writes and sings tough and tender ballads, direct from her heart to yours.

There’s a new album, Night on Fire, released on Sept 28, 2018 and — while she now calls Toronto home — she lives on the road, and there’s dust on her shoes, love in her heart, and a whole lot of music in her soul.

Parents: Musicians, travellers, supporters who raised their kids in a small community outside Edmonton, Alberta. Back in the day, you’d call them hippies.

School: Oh, yes, years of it. Fifteen years of private piano lessons, starting when she was five. And her classical training took her, as a teenager, to workshops and camps and festivals. In 2008 she attended Grant MacEwen University’s jazz and contemporary music programme as a performance major.

Rewards: Offered a part-time teaching position at MacEwen, and accepted into Paul McCartney’s music school in Liverpool. She passed on both; it time to get into the real world of playing music for a living.

A debut record: In 2011 she released Lady Flower — an EP with a title track that earned her an honourable mention in the International Songwriting Competition. One of 13 finalists in the performance category; there were 16,000 submissions. And the record also earned her gigs at the Edmonton and Canmore Folk Music Festivals.

And another album: Two years later she released her first full-length album, Only the Moon. “Beautifully crafted… showcasing a voice that has warmth and beauty,” wrote David Farrell. He ought to know; he runs Canada’s music industry website, FYImusicnews.ca.

On the radio: Well, it didn’t get as much airplay as Adele, but Only The Moon was all over all the CBC’s channels, a ton of stations on the left side of your radio dial, and outlets in New York, Florida and a bunch of other American states (in between the right-wing radio chatter and the ads for car dealers and funeral homes).

On the road: Jenie has a 2003 Honda Civic, and she can’t begin to figure out how many hours she’s driven — but one year she put 100,000 kilometres on the clock . It’s not a big car — enough for her, her keyboard, and a couple of suitcases. But it’s carried her from Edmonton to Toronto and back at least half a dozen time, not to mention crossing the Rockies for gigs, and traipsing out to the Maritimes.

Where Jenie plays: Well, just about everywhere. House concerts, sure. Big festivals, sometimes, and some really cool small ones. Toronto’s Massey Hall for the Toronto Women’s Blues Revue. Hotel lounges, because they have pianos and you can practice. Tough-assed bars like the Dakota and the Horseshoe in Toronto, and the Commercial back home in Edmonton. Folk clubs, “listening rooms” like Hugh’s Room Live, and even a series of “couch concerts” in peoples’ houses in southern BC. Most anywhere, in fact, with a roof.

Honours? There have been a few: nominations for Edmonton Music Awards as “Artist to Watch” and “Female Artist of the Year” in 2013 and 2014 and her achievement as semi-finalist at the 30th International Blues Challenge in Memphis (where she represented northern Alberta). Oh, and a nomination for a 2016 Maple Blues Award for best new artist of the year.

Who she sounds like: Always a fool’s game, this — imagine a singer, songwriter and player touched by the music of Tom Waits, Memphis Slim, Nina Simone, Bonnie Raitt, and some people say she sounds a little like Eva Cassidy (“I do?” she queries). She listens to old blues, edgy indie artists, sixties r&b, piano players with chops and soul, and the classic American songwriters.

What’s next: A superb new CD, produced by Stew Crookes (who’s worked with Jason Collett, The Hidden Cameras, Jadea Kelly and more; you know who these respected independent artists are). There’s a contemporary r&b sound to this, with more than a nod to old-school tradition. Ten new songs, full of heart. Expect the CD in the Fall; hear the new songs wherever she plays.

OK, that’s the story. Jenie Thai’s an artist with history, yet still fresh and joyful and — when she wants — tough and not-to-be-messed with.

You now know more about her than you did before. But, as always, it’s the music that counts, not the back story.

And the music will make you really know the woman who makes it.

With a combination of contemporary and traditional blues piano, and a fiery passionate voice, Jenie “Thai” Nolan has been making a name for herself across the country and the world. View Article
– Vue Weekly, Stephan Boissonneault

“If anyone thought about the combination of traits required for a timeless and impactful career, they would most likely be describing the same traits possessed by the featured artist in this edition of Notes & Quotes: Jenie Thai. Although self described as someone who is just emerging onto the music scene, she has an impressive resume in both music academia and press reviews.”
– Maple Blues Newsletter, Erin McCallum