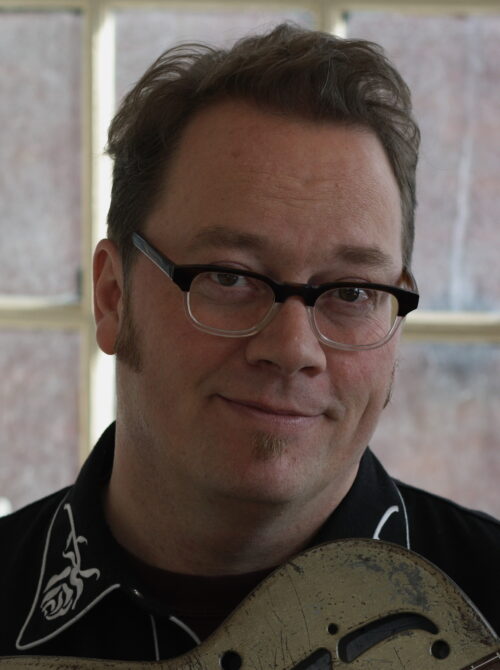 Canadian roots music hero Rick Fines has had a long and storied career as one of the country’s hardest working musicians. He has toured across Canada countless times solo, as a duo or with a full band and has recorded over 14 albums and has been a guest on many others. Steeped in roots music, Rick Fines crafts a unique blend of warm-hearted blues, juke joint folk, and dockside soul that both embraces and defies the genres that influence him. As a veteran of the North American blues and folk circuits, he engages audiences with captivating songs, diverse guitar styling and his signature vocal growl. Rick’s career has seen him working in stellar collaboration and as a successful solo act. First gaining attention as part of the legendary Jackson Delta, he’s since released four solo albums, another with his own Rick Fines trio, and a critically acclaimed disc with fellow troubadour, Suzie Vinnick.

On Fines’ newest release, Solar Powered Too, the bulk of the songs were recorded in a little gazebo in the North Kawartha woods, with solar power. You can hear the crickets and cicadas if you listen carefully.

“After spending a lot of my time playing on my National Steel, I knew I wanted to make another album for guitar and voice, only this time it would be mostly slide guitar on a steel bodied guitar”, says Fines. “I decided I wanted to return to my little cabin in the Kawartha Highlands and record again with the modest solar powered setup there – two panels and 4 golf cart batteries.” The seclusion of the recording process has paid off immensely – bringing to life the honesty of his lyrics and accessibility of his music.

With 11 originals and co-writes, and one cover of a Jesse Winchester song (That’s What Makes You Strong), Solar Powered Too is a powerful release, ripe with vivid images of sorrow, optimism, and the complexities of life. Featuring appearances from other respected Canadian artists such as Alec Fraser, Gary Craig, Roly Platt, Melissa Payne, Jimmy Bowskill, Rob Phillips, Suzie Vinnick, Stacie Tabb, Sherie Marshall and Samantha Martin, Solar Powered Too is Rick Fines’ most accomplished album to date. “Releasing an album during a pandemic, when all my gigs are cancelled is a little strange“, he says. “But this album was made with the help of my friends and it carries that strength on its journey.”

Note:  This concert will be held outdoors, in the fresh air on the patio.* COVID protocols in place and seating is reserved. Please make us aware of seating preferences beyond the number of tickets you have purchased for your party.