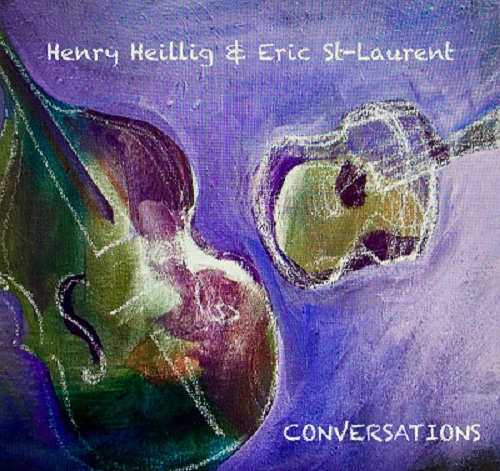 Bassist  Henry Heillig  and guitarist  Eric St-Laurent have been performing together for over ten years, often in Carlos del Junco’s acoustic trio, the Blues Mongrels. Their rhythmic rapport is  dynamic, and their musical kinship inspires an adventurous, friendly approach to jazz. When performing as a duo, they call tunes and dive in, unafraid of what direction the music may take. 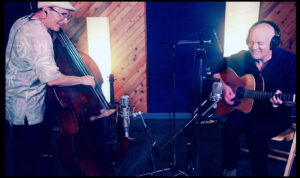 Both musicians are well-known as bandleaders  and composers in their own right: in the 1980s, Henry co-founded the nine-piece “afrolatinfunksalsaworldbeatjazz” band Manteca, while also touring with Sharon Lois and Bram…you may have seen him on The Elephant Show in your or your children’s youth.

Since 2000, Henry has also led his contemporary jazz quartet Heillig Manoeuvre, and was Musical Director for “The Journey” a theatrical history of the redevelopment of Regent Park.

Eric arrived in Toronto in 2008, after a decade living and performing in Europe. Since then, Eric has led his own groups and recorded numerous CDs-worth of his compositions, as well as being an in-demand session musician and producer. Eric was also involved with The Journey.

During the recent pandemic, when live performances were banned, the duo got together at The Canterbury Music Company to spend an afternoon playing some of their favourite tunes, mostly standards, with some originals and a Hendrix ballad thrown in. The result became a recording called Conversations.

You can find/audition/purchase Conversations  at Bandcamp.

Gates open at 1pm for the bar and wood fired pizza. The matinee is 2-4pm