Al Lerman RETURNS to the Old Church with the Weber Brothers!

The last time I played with the Webers was one of the most magical musical nights I’ve had. That says a lot for a 48 year long career. Can lightning strike twice? There’s a very good chance. – Al Lerman

Bluesman Al Lerman is a multi-instrumentalist, singer and songwriter. He was founder and leader of the 2X Juno Award winning band FATHEAD, and along the way built a solid career touring as an acoustic solo act, accompanying himself on guitar and rack harmonica. An engaging and skilled artist with a dry wit to boot, he is regarded among the top harmonica players in the country.

His prowess on the instrument has earned him ten Maple Blues Award nominations. He has been heard on countless recordings and live sessions with some of the best in the blues. In 2016 his standout “Slow Burn” disc made the esteemed world-wide list of Top 100 Blues Albums Of The Year. That same year he also garnered a Maple Blues Award nomination for “Acoustic Act Of The Year”. In 2017 he received a Recognition Award for “Leadership In Arts & Culture” from the County of Peterborough. His newest album “Northern Bayou” was released on April 12, 2019.

Side projects include the MAPLE BLUES BAND, the house band for the annual Maple Blues Awards show. They have backed guest performers such as Colin James, Shakura S’Aida, Paul Reddick, Duke Robillard and many more. GENIUS + SOUL, led by pianist Lance Anderson, celebrates the music of Ray Charles. Ray’s soulful repertoire gives Al’s big, Texas-style tenor sax a chance to shine. Throughout the years, Al has been active in sharing his adept harmonica skills, conducting workshops in schools, music camps and festivals.

The blues bug bit at a young age when Al was taken to hear the famed duo of SONNY TERRY & BROWNIE McGHEE at Toronto’s Riverboat coffeehouse. His interest in the music immediately sky-rocketed, and over the years he saw the duo no less than forty times. He discovered many blues greats that were regularly touring through the city. Moving into his twenties while playing in local Toronto blues bands, Al sought out many of his musical heroes, seeking both advice and inspiration. He considers himself fortunate to have sat in with blues giants such as MUDDY WATERS, WILLIE DIXON, KOKO TAYLOR, SUNNYLAND SLIM and many more. A long friendship ensued with 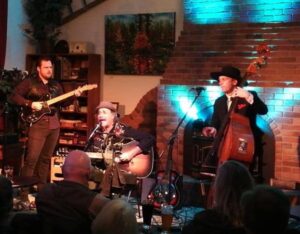 Chicago harmonica player CAREY BELL who mentored him on the instrument. Hearing him now, there’s no doubt he has learned his lessons well.

The Weber Brothers, acclaimed for their undeniable musical talent and highly energized, awe-inspiring performances, have forged quite a reputation over their 17+ year career.

“The two of us have been playing music together all our lives,” says Sam Weber. “When you’ve done that much together, it becomes kind of telepathic in a way.